Cruise on the Ohio River

Largest Toyota Plant in the USA

Think BIG when you arrive at the ARK.
At 510′ long, 85′ wide and 51′ high it was built to the dimensions given in the Bible. The Ark Encounter is three exhibits in one – the massive Ark structure itself, the incredible craftsmanship, and the beautifully-fabricated teaching exhibits. The combination of all three will amaze and inspire you to think differently about the biblical account of Noah’s Ark. It is the largest timber frame structure in the world, built in part from Amish craftsmen. The Ark is an architectural, engineering wonder with three decks of world-class exhibits.
.
You will enjoy the Ark Encounter and exhibits on your own, so you can take the time to enjoy them at your own pace. You’ll meet Noah and his seven family members who lived aboard the Ark, and cared for all the animals during the flood. See their living quarters, what they brought on board and even the kinds of clothing they may have worn. Lunch is available outside the Ark at Emzara’s Kitchen, and snacks are available on the Ark.

CREATION MUSEUM…At the 75,000-square-foot Creation Museum, the pages of the Bible dramatically come to life. Journey through biblical history as you marvel at the Garden of Eden alongside Adam and Eve. Spot the serpent coiled among the tempting fruit, and discover more about Noah’s Ark and the Flood. You’ll see state-of-the-art exhibits, fossils, and even a full-size Allosaurus skeleton, a petting zoo and planetarium. Tour the beautiful botanical gardens as you make your way to the petting zoo and camel rides. You’ll be among the 2.7 million guests that have made their way through this magnificent museum. Prepare to believe! Lunch is on your own at Noah’s Café.

The Garden of Eden 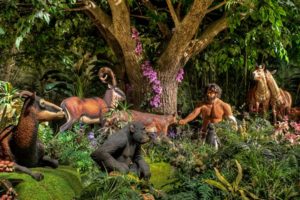 …After making the world and all the animals, God created Adam, the first man, on the sixth day of creation. Adam named all of the animals and then God created the second person, Eve, on that same day. God placed Adam and Eve in the perfect Garden of Eden where they lived in an untarnished relationship with God. At the end of the sixth day, God called everything He had made “very good.” 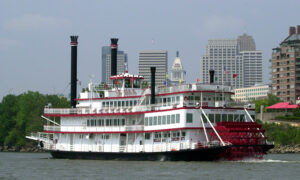 Newport KY…BB Riverboat Dinner Cruise…You haven’t really experienced Cincinnati until you take a riverboat cruise aboard the BB Riverboat. See the city from a different point of view and enjoy an evening dinner while you take in the sights. With two decks and a dance floor you will have an evening to remember. This is one of the highlights of this tour.

American Whistle Factory...They’re a BLAST! They are the only manufacturer of metal whistles in the USA. Since 1956, they have been committed to “Made in America” and to delivering the ultimate in personal safety tools. They are proud to manufacture THE American Whistle, used by millions of Americans across all walks of life. Their whistles are used by the American Red Cross, Boy Scouts, corporations, police officers and college students.

Toyota Motor Manufacturing, Kentucky, (However it is temporally closed due to Virus. Hopefully it will open open by the time we get there).  It is a free exhibit so it doesn’t change the price.  Toyota’s largest vehicle manufacturing plant in the world, where 2000 cars a day at the rate of 2 per minute roll off Toyota’s assembly lines in Georgetown KY, where full-time employment is more than 8,000. The plant is 8.1 million sq ft under one roof which is equal to 169 football fields. They have their own Hospital & ambulance service In addition to the Camry, America’s best-selling car, they manufacture the Camry Hybrid, Avalon, Avalon Hybrid and Lexus ES 350. On display is the first Camry built there, along side of it the latest Camry build.  You can check out the styling difference and the price difference.