The country western musical featuring the hits of Dolly Parton and Tammy Wynette! Three gals facing big crossroads in life find themselves at a Greyhound bus station, each of them Nashville bound to follow their dreams of country music stardom. With over 30 songs including, “Stand by Your Man,” “9 to 5,” and “I Will Always Love You,” this foot-stompin’ musical has played to sold-out audiences across the country! Hank Thompson wrote the original song, and Kitty Wells wrote the comeback.

“You’ll have to step on your toes to keep them from tappin’.” 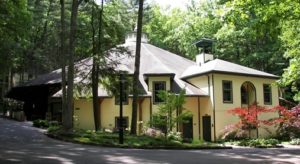 One of south-central Pennsylvania’s few professional theatres, and one of the oldest summer theatres in America, Gretna Theatre is located in the arts/resort community of Mt. Gretna, PA. The original Playhouse dates back to 1892 when it was built as the centerpiece of the newly-created Pennsylvania Chautauqua. Gretna Theatre, which has produced the summer theatrical shows since 1927, is a 501(c)(3) non-profit organization which rents the Mount Gretna Playhouse for its productions and works in conjunction with the professional unions of Actors’ Equity Association and the Stage Directors and Choreographers society. Many Broadway stars have performed at Gretna Theatre – including Bernadette Peters, Charlton Heston, Faith Prince, Laurie Beecham, and Sally Struthers.